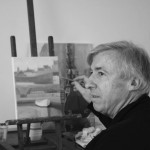 Born in August, 1949, Jacques grows up in the village of Saint Pair sur Mer near Granville, on   the coast of Normandy.

At the age of 5 he announces his love of the sea and his intention of growing up to be a sailor. At 17 he began his career at sea as an officers apprentice with a ship owned by the Delmas Vieljeux Company – and discovers his profession aboard a good old “Liberty ship”. He enters   the French National School for Merchant Marines at Saint Malo in 1970 to become a captain. He began sailing the world as a deck officer and engeneer aboard a variety of large ocean-going vessels for Delmas Vieljeux : the coast of Africa, the US, the Red Sea, the Mediterranean, the Indian Ocean, etc… while at sea he develops his talent for drawing and painting through numerous works highly prized by friends and family.

In 1982 he ends his long ocean-going trips to begin coastal navigation. He’s hired by Emeraude Lines as captain of the fast ships, Trident, on the route between Granville, Saint Mâlo, and the Chanel Islands – which he is especially fond of.

He recorded for posterity the beauty of these islands – most notably Chausey – thousands of times during his anchorages aboard his sloop the Wells Fargo.

Next, as captain of trailing succion hopper dredgers based in Rouen which vacuumed the sand and silt from the river Seine, Jacques and his family found a house in Honfleur and live there for 25 years. He discovered the charm of this city whose history – rich in maritime and artistic interest – inspired to show his paintings to the public at several exhibitions at the Museum Grenier à Sel (Salt Attic).

Retired and returned to his home town, Jacques spends a good part of his time at his two passions: the sea and painting.

Discover his world through this site. Have a pleasant visit!